The Radisson Hotel in Aruba 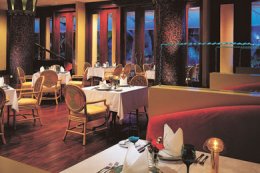 Editor’s Rating 4/5 Palm Beach, Aruba's best stretch of wide, sugar-soft sands, is home to many of the island's top resorts.The AAA Four Diamond Radisson Aruba has the advantage that comes with being first: a great location with more land - 14 acres - and more beachfront - 1500 feet - than comparable properties.

Opened as the Aruba Caribbean Resort in 1959, the hotel - the first high-rise to be constructed on Palm Beach - was built as a place for the King and Queen of the Netherlands to stay when they visited this Dutch island. Radisson purchased the hotel, which had since become the Golden Tulip, in 1999. After a year of renovation, the property reopened in 2000 as the 354-room Radisson Aruba Resort, Casino & Spa, the chain's flagship ... more property. Accommodations are in three buildings.

Don't let the dated and dark lobby dismay you. Instead, register, drink your welcome fruit punch, and walk to where the lobby opens into the garden. That's where you'll meet Lola, a chatty green parrot, and Two, a curious but more reserved African grey parrot. After listening to us repeat "hello" several times, Lola mimicked our tone with pitch-perfect precision. Two bobbed his head up and down, eyed us cautiously and eventually repeated our greeting. The cages of birds continue into the garden, a lushly landscaped area that winds toward the beach.

At the Radisson, unlike at the locations of many of its competitors, there's more sand and less concrete around the pools and the restaurants. For us, that added to the island feel. For children, the hotel offers supervised activities for ages 5 to 12. For adults, the Radisson has the Larimar Spa, the most inviting facility on the island, plus an onsite casino.

U.S. travelers go through U.S. Customs and Immigration in Aruba. The island recommends that you arrive at the airport three hours before departure.
... Get more Planning and Tips

As a TripAdvisor company, we searched 200+ sites to find the best hotel prices.

Enter dates to search 200+ sites for the best hotel prices.

All rooms, whether garden, pool or oceanview, are the same size and come with either balconies or patios big enough for chairs. Complimentary Internet access, bathrobes, coffee-makers, safes and mini-bars are standard. Beware of the latter because as soon as you pick up an item from the mini-bar, you are automatically charged for it. Since we usually remove drinks that we don't want and replace them with items we do want but purchased for less money off-site, we resorted to chilling our bottles of water and juice by keeping them in our ice bucket. We didn't request a complimentary room refrigerator, although they are available.

The West Indian-style mahogany four-poster beds and cane chairs add an island feel to the rooms. ... more Most accommodations (93 percent) feature Sleep Number beds. We had fun figuring out our perfect setting. Cribs are complimentary, as are rollaways, assuming the occupancy is four people or fewer. A rollaway for the fifth person costs $55 per night.

Exploring The Radisson Fort George Hotel in Belize with my ...

JUMP IN THE POOL AT RADISSON ARUBA

Playing in the Radisson Aruba Pool 4

Whats a decent hotel for reasonable $ in downtown hartford, ct?